Boka Kotorska Bay is the only fjord of the Mediterranean Sea. On the slopes of this remarkable beauty, subtropical palm, agave, wild horn, kiwi, flowers of mimosa and magnolia grow. Ancient towns that are widespread on the waterfront, attract travelers to architectural monuments and fascinating legends.
At 09:00 departure from Budva to Risan along the picturesque Bay of Kotor Bay.
Walking through the Risan (tour of the Church of the Holy Apostles Peter and Paul and the Roman Mosaic) -30min.
Risan is an ancient city in Montenegro. This is the oldest area of Boka Kotorska. The first signifies have dated since the 4th century BC, when it was the capital and the most important fortress of the Illyrian state, which was administered by Queen Teuta Risan, and also wandered during the war. In the time of the Christian era, the city was dominated by the Romans, who gave it a new name – Rizinum. During the period of Roman governance, the city’s greatest bloom was noticed. Before the arrival of the Roman mosaic, which left the most significant traces of the Roman authorities in Montenegro.
On one mosaic, which is the most preserved, the Greek God of Sleep Hipnos is shown. This painting is a unique kind in Balkan and one of the rarest sights of the city.

The Church of the Holy Apostles Peter and Paul is located in a small town park not far away from the pavilions with Roman mosaics. The construction of the church began in 1601 and was completed in 1796. The last architect was Italian Antonio Kosta, who died in this church when sank part of the port before the end of the construction. The iconostas of the temple were ordered in Russia, and Venetian masters have done precious work for icons.
Departure to Herceg Novi.
After that will come the walk and tour of the Old Town in Herceg Novi, where you will visit the fortress Kanli Kula and the Orthodox monastery Savina (3 hours).
Herceg Novi — is a resort on the Adriatic coast of Montenegro, located in the picturesque Boka Kotorska Bay, in pedestal of Mountain Orien. 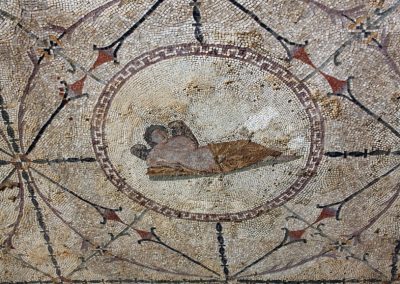 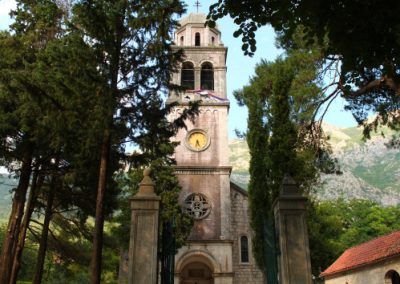 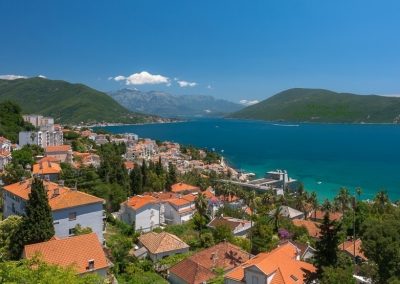 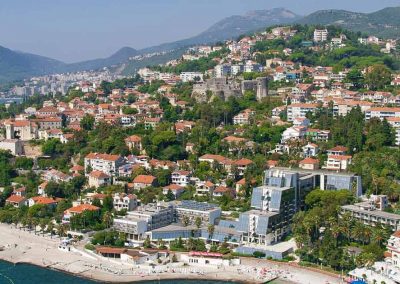 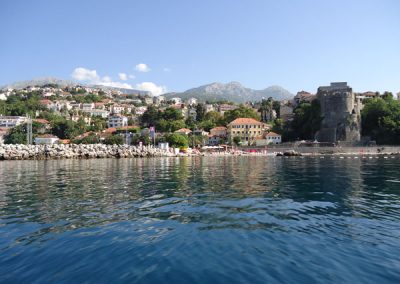 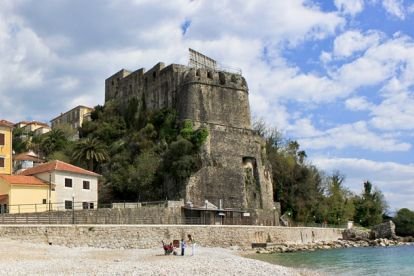 The city of Herceg Novi was founded in 1382 by King Tvrtko I, and so the city quickly became an important center for salt trade. The modern name of the area came from the name of Vojvoda Stepan Vukcic, during whose rule this area became a full town.
The city of Herceg Novi is often called the “botanical garden of Montenegro”, because in its parks there are many relict trees and shrubs.
Old Town Herceg Novi, despite other Montenegrin ancient cities, is not only the protected area surrounded by the walls of the fortress, but it consists of several architectural objects , built in different time and by different people, but united on the same territory in the central part of the city. Since the Old Town is on a slope, it contains scattered streets and high stairs. It’s sometimes called the “the city of a thousand steps”.

Walking through the Old Town
Right next to the entrance to the old part of the city, there is the main square (one out of four) – the square Vojvode Stefana Vukica, in whose governence town was named Herceg Novi. In the Venetian authorities, this area was also called Belavista, which means “stunning view”. On the square is one of the town’s main temples – the Orthodox Church of Archangel Michael, built in the 19th century, with features of Gothic, Byzantine and Romanesque styles. And in the middle of the square there is the succession of the Turkish epoch – Fountain Karaca. 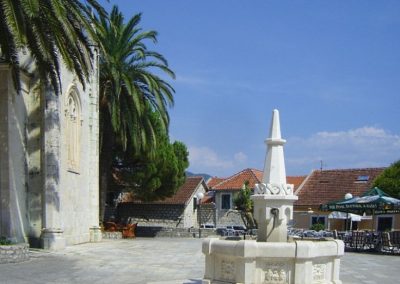 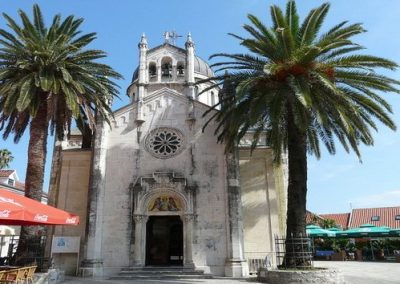 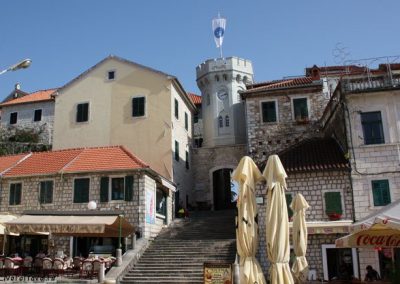 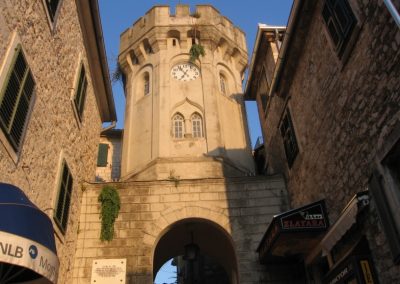 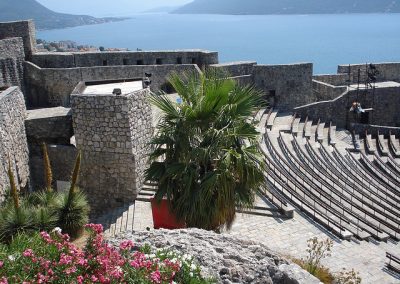 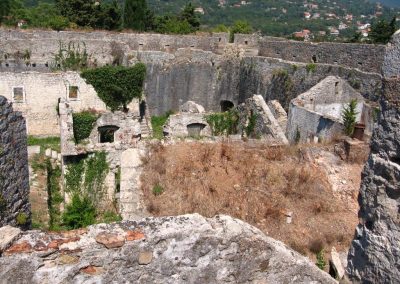 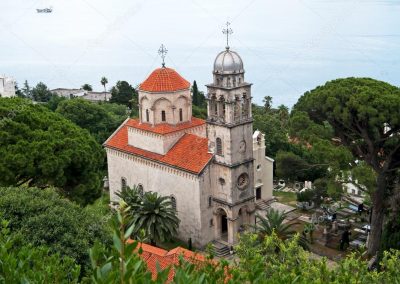 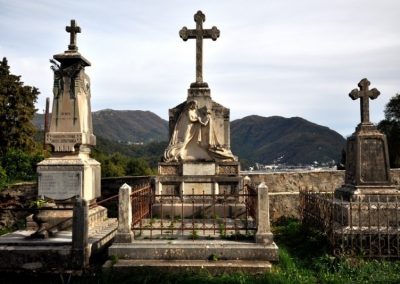 The main symbol of the city is the Sahat-Kula (Clock Tower). It appeared in the Ottoman period, and was built in 1667 by the Turkish sultan Mehmet, whom passed through the main entrance during the Turkish governance. Later, with the arrival of the Venetians, the tower was renovated and slightly changed, and it got a new name – Tora. On this ancient tower, there is a big clock, which exists today, and within it is the icon of Black Madonna, which was named after it was supposedly smudged from cadyes. Beside these, there are also two towers in the city – the West Tower, located just above the Clock Tower and the Tower of Sv. Jerome, who was erected in the honour of a local hero and liberator, Jerome Corner. 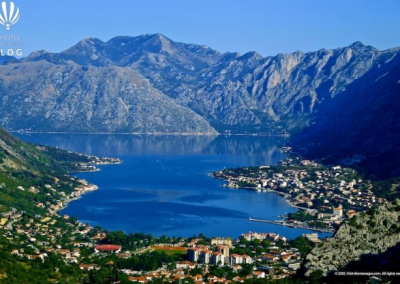 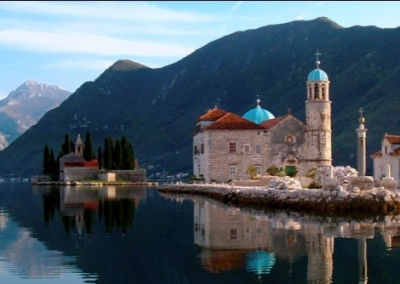 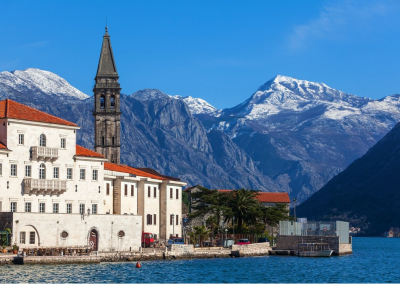 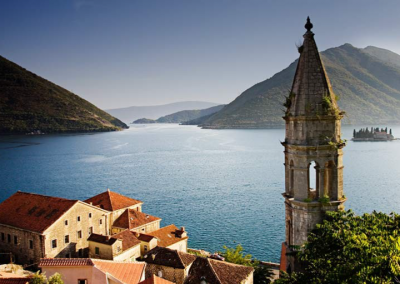 After a walk around the Old Town, tourists will visit the Orthodox monastery Savina, which is located 2 km away from Herceg Novi, on the high coast of Boka Kotorska Bay, in a densely Mediterranean forest. The monastery was named after St. Sava, the first Serbian archbishop. The oldest parts of the monastery have dated since the beginning of the XI century, and the first written reference of the monastery since the middle of the 17th century.
There are three churches in the monastery complex: the Small Temple of the Dormition of the Most Holy Theotokos, the Big Temple of the Dormition of the Most Holy Theotokos of St. Sava, located outside of the complex, near the upper cemetery. The last temple was built, most likely, St. Sava in the 13th century. The main sanctuary of the monastery is the wonderful Sava’s Mother.

Departure to Perast.
Then you will sail by the boat to the island of Lady of the Rocks, tour the temple (40 min), visit the city of Perast, lunch.
On your way to Perast, in the background of the magnificent panorama of the Bay of Kotor, you can see the silhouette of the church of Our Lady of the Rocks. Ancient church is located on the western island. According to the legend, the sailors found the icon of the Virgin with a baby on the walls and then they started bringing stones to the island in order to build a church.

The trip ends in the Kotor Bay with a tour of the Old Town in Kotor, you will spend 40 minutes with a guide and then you will have free time fot your activites (2 hours).
The city of Kotor, the pearl of the Boka Kotorska Bay, is not accidentally on the UNESCO World Heritage List. Behind the strong walls there are famous historical and architectural monuments: the clock tower from the 17th century and the cathedral of St. Trifun, dedicated to the protector and city defense counsel. The remains of the 14th century frescoes and rich treasures with the products of the Kotor and Venetian jewelers are in the temple. Church of St. Luke, Church of St. Ana, Church of St. Maria, the Duke’s Palace, the Napoleonic Theater – represent only a small part of the wealth of this city. The rocky staircase with steep stairs leads to the fortress located at an altitude of 260m, from which you can have an unusually beautiful view of the medieval town and amazing bay.