We are suggesting you a traveling to the last puzzle of Europe – Albania.
We’ll start from Budva and on the way to Albania, you’ll be able to enjoy the Budva’ and Bar’s Riviera views and also we are going to take a several photo breaks in the most interestin places.
On our way through the mountains that will lead us straight to Albania, you will see that the Montenegrin landscapes are replaced by completely different natural terrains and strucutures.
Albania is famous by its beautiful coast, clear Adriatic Sea, enriched history and a lots of concrete bunkers. In whole Albania there are about 700 000 of them. They were built by the order of the ruler of Albania (whose name was Enver Hodza), in case of a nuclear war.
On the territory of Albania, used to be about 24 bunkers per square meter. Today they are partially dismantled in the cities, but most of them continue to exist and represent the most recognizable feature of Albanian landscapes. Some bunkers are turned into taverns or mini-hotels, but the most popular way of using them have found teenagers as a date meeting place.
During the tour, we’ll visit the town Skadar and its famous fortress – Rosafa, which is connected to the town and offers a stunning view of Skadar Lake, River Bojana and the whole town.
This fortress has a sad establishment history, which has been carried through the time for more than 2000 years. The energy of this fortress is completely different than fortresses and Old Towns in Montenegro. In what you can get assured by yourself! This history won’t let you indifferent, for sure.
From the fortress you’ll be having the opportunity to see the multi-domed leadle mosque, which is the only one in town that wasn’t destroyed during the cultural revolution back in ’60s, located in very picturesque valley of the River Bojana.
Then we’re heading off to Skadar – one of the oldest towns in the South Europe, which was founded in the 4th century BC and has a rich cultural and historical heritage.
Albanians belong to Islamic religion, although there are some of them who are Orthodox and Catholic as well.
So, you’re going to see: the very impressive mosque of Sheikh Zamil Abdullah Al-Zamil, the public museum (Museo-Papulo) which contains an interesting collection of historical photographs as well as archaeological findings. You’ll also see the Franciscan church Ruga-Ndre-Med and the Orthodox Church.
While sightseeing the Skadar, you’ll pass through the Kol Indromeno street, the Democracy Square with a fountain as well, and you’ll be able to see Mother Teresa monument.
You’ll have the opportunity to stroll through the streets with colorful cafes, taste delicious ice cream and do some shopping as well.
More information:
• The tour will last 10-12 hours.
• During the tour you’ll be having a lunch break.
Additional charges:
• You’ll be paying the entrance to the museum as well as to the fortress Rosafa (1-2 еuros per person)
• The food in the café/restaurant you will pay separately.
The price: car – Kia Ceed (4 people) – 170 еuros
car – BMW X 5 (4 people) – 200 еuros
car Mercedes Vito (7 people) – 250 еuros 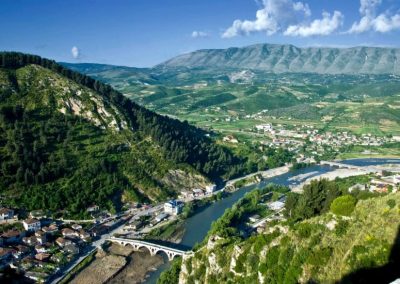