Budva’s history counts more than 2500 years. This is one of the oldest towns in the Montenegrin coast.
You can enter the Old Town through 5 gates, out of which 2 are comletely preserved. The wall of a fortress is long about 450 m and its width is 2 m. On it you will find a counters and weapon’s platforms. On the seaside, the Old Town has the most comfortable part – Citadela (the Maritime Fortress of St Mary) where the ancient inhabitants used to hide themselves from the enemy attacks. Today, on Citadela you’ll find the Maritime and Archaeological museums, a small library, gallery, several cafes, a theater scene and on the top of it there is an observation spot with telescopes.
There is also the Catholic Church of St John in nearby, which is the largest church in Budva. It was built in the 7th century in Gothic style and its belfry is higher than any other building in the town. The church contains: the church itself, the belfry (which was built in 1867) and the bishop’s courtyard.
Inside of the walls, near Citadela, there is another church, the Catholic Church of the Holy Virgin, which, at the same time, represents the main fortress in the town. The church was built in 840 by the Benedictine monks. Today, the church is not active, but its acoustics is used for organizing music evenings.
Next to the Church of the Holy Virgin, there is the Orthodox Church of St Sava, the founder of the Serbian Orthodox Church. The church is small and and it doesn’t work, but this place is connected with many legends from this enlightenment’s life. The church is very valuable, as well as fragments of frescoes which has dated since the middle of the 7th century.
There you can find an active Orthodox Church of the Holy Trinity as well.
During this tour, you’ll be able to see a historical sights and you’ll also have the opportunity to feel the energy of the Budva’s Old Town, and learn 3 romantic love stories which are unbreakably connected to the history of Budva.

• The entrance tickets to the Old Town and Citadela are not included in the price . 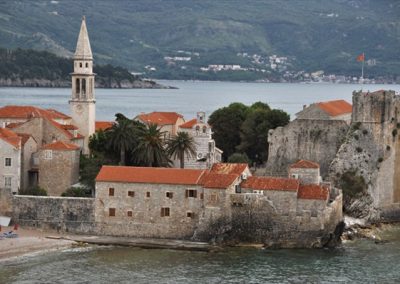 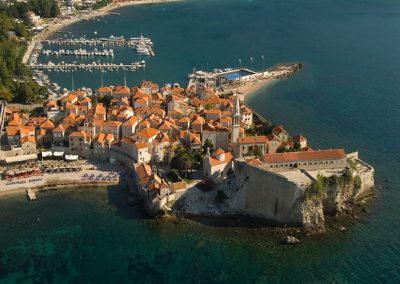